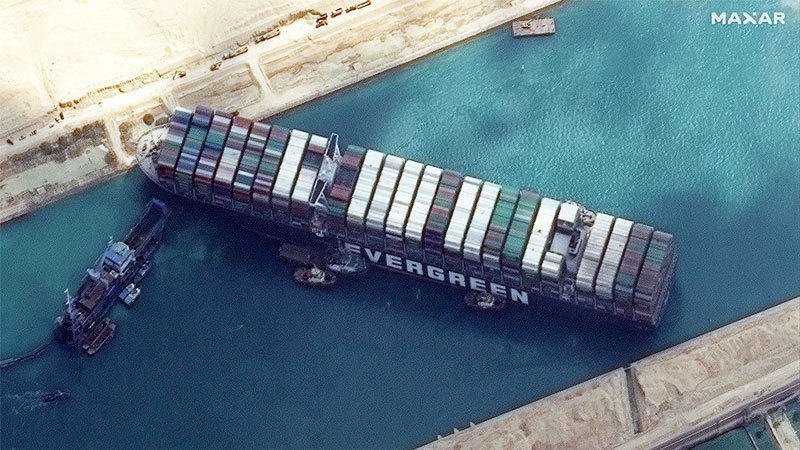 DMT ( Detection Monitoring Technologies ) builds multifunctional radar systems with an emphasis on safety. DMT’s most important markets are port and waterway security, with installation sites around the world.

Recent events have shown that obstructed canals and waterways can have a huge impact on commerce, as well as unwanted scrutiny from the press.

This document explores how to use DMT radar systems for vessel traffic monitoring while maintaining a secure watch for intrusions and suspicious behavior.

Canals are like arteries for commerce – they carry much needed food and other goods to where they are needed in the shortest, and fastest possible route. There are hundreds of canals all over the world. The top 10 canals cover some 2800 km (1740 miles), but save hundreds of thousands of kilometers of travel distance for shipping vessels. When vessel traffic flows freely, the world benefits.

When clogged, the entire world can suffer. This is especially true if it is a major artery that is clogged, like the recent vessel incident in the Suez Canal.

The first known canal (and longest one today) was built over 2400 years ago in China, and many of today’s major canals were built between 1850 and 1940. These canals were built when vessels were far smaller than today supertankers and giant cargo ships. Ship beams (widths) are now just a few meters from the shores of many canals, which leads to potential issues when mechanical issues arise or collisions occur.

Radar can help keep these shipping arteries clear. DMT security radar systems are found on waterways around the world, including canals. These systems are primarily used for security – tracking both friendly or known vessels, and small unknown boats.

These radars police waterways and ensure rapid response to intruders or vessels violating the rules.

These waterside security radars can also be used as vessel traffic monitoring and for shoreline groundings. This paper discusses two ways to use DMT security radars for this purpose.

The DMT Remote Client (DRC) is a map-based interface. This interface communicates to radar systems, cameras, transponders, GPS, and many other devices. AIS (Automatic Identification System), which is found on all cargo ships worldwide, is one of the types of transponders the DRC can monitor.

For waterway security, the DRC protects the waterways by notifying the operator of all vessels detected.

The operator can tell the DRC to ignore all cargo vessels by ignoring all detected vessels that also have AIS. Only boats without AIS will then appear on the screen. Cameras are automatically pointed at those boats

When the radar system is first installed, a secure zone is drawn on the waterway map. All land is thereby ignored. Figure 3 shows an example installation in a canal. Radars, cameras, and AIS systems would be installed along the waterway at a 3 or more kilometer spacing.

Only one DRC display is required for every 24 radar towers. A security zone is drawn such as the one in Figure 4. Whenever any vessel enters this area, the system will alert the operator. In most installations, the operator sets up the DRC to ignore vessels that have an AIS installed.

Each DMT radar has its own processor, which is a server. This server allows multiple remote displays to be connected to it via a network connection. The server manages the network connections, and prioritizes communication based on password levels.

Each DRC that is running on the network can have its own unique alarm zones and reporting features.

There is a second type of zone that can also be drawn on the display. This is a warning zone.

The warning zone has a different color indication (yellow), and it can also be assigned a different sound file from the red alert zone. These warning zones can be used for any purpose, including as a warning of vessels getting too close to the shoreline. Figure 5 shows how such a warning zone could be set up.

And since we’re most concerned with freely moving cargo ships, the warning zone can be setup to only alert the operator when a vessel equipped with AIS is entering these zones.

The inner boundary of the yellow warning zone could be drawn to match the rising slopes of the bottom of the canal (see Figure 6).

The boundary would then be match the depth for the deepest vessel draft expected on the canal.

Another feature of DRC is the ability to give a name to any zone.

This permits different zones to be used at any time. For instance, the names “bad weather”, or “supertanker zone” could be given to zones for those purposes. The operator can switch between these zones at any time.

This approach uses the standard DRC software that is sold with DMT radars. The next section uses the optional VMT (vessel Traffic management) add-on.

DMT’s vessel traffic management module can be added to any version of the DMT Remote Client (DRC) installed after June 1, 2017. This module requires the ProcessOption module (ProcessOption_TR v1.1 or later) and PPI (Plan-Position Indicator) module (MRPPI_v4.1 or later).

The main VTM features of the module are:

Both tables are dynamically sized for the number of tracks being listed (up to a
maximum of 20). The tracks shown are always ordered by increasing distance from the closet track to the current selected reference point (RefPtsDisTable) or to the reference track (ProxDataTable). When displayed, each table is updated every two seconds.

These tables supply information relative to existing tracks. “Tracks” include radar tracks and AIS tracks. A correlated AIS track (a blue one) has an associated radar track attached to it, so it will show up on the list using that radar track as its ID. The ID used for tracks on these lists is of the form “rr-tttt” where rr is the radar number (“00” for entity tracks) and tttt is the 4 digit track number. AIS will the unique nine-digit MMSI number broadcast by the AIS transponder.

The DMT Remote Client allows the user to create “Reference Marks” on the PPI display which mark points of interest with a labeled symbol (cross). Reference marks (also called reference points) can be used to define a mooring point on a map, or a buoy or some other important landmark or water feature.

This document will describe how reference marks are useful in the one of the DMT Remote Client’s navigational features, the Distance To Reference Point Table.

Any number of reference marks may be created using the procedure described here.

The set of reference marks created by the user during an operating session will be displayed on the PPI during that session, and will be restored in future sessions if the Save Settings function is performed after the reference marks are created.

To create a new reference point, select the context menu for the PPI with a right button click on the PPI display, and select the insertion option (Ref Mark plus Click Pt or Lat/Long) to start the process as shown in Figure 7.

This dialog allows the user to assign a caption to be shown with this reference point on the PPI
display. Here the caption “M1” was selected. The reference mark is then rendered on the PPI display as
a cross symbol with the caption below it as follows:

The caption will also be shown with this reference mark in the RefPtsDistTable as shown later in Figure 9.

The reference markers can be used to line the banks of the canal just as the yellow warning zones mentioned earlier. See Figure 10. Data is saved relative to these markers, so operators can determine if certain locations on the canal are more dangerous or require modifying.

This table lists the current distances from existing radar tracks to designated reference points (up to six total). The reference points in the table are the standard Reference Points defined on the PPI display – which are created with a right click on the PPI and select the Ref Mark option.

Each reference point can be named and saved/restored with the settings file. The form lists all current tracks (either radar tracks or entity tracks) and their current distances from the defined reference points.

The RefPtsDistTable is normally hidden and must be opened by the user for viewing. The table is opened by selecting the menu option Display/Ref Pt Distances as shown in Figure 11.

When opened, the RefPtsDistTable will be displayed on the PPI and appear as shown in Figure 12.

If fewer than six reference points are defined, then the unused columns will be labeled Undefined as shown in Figure 12.

The Ship Proximity Data table shows bearing, closing speeds, CPA (closest-point-of approach) times and distances between the selected radar track, and all other tracks (up to 20 max) listed in the track table. This form is made visible by depressing the Control key and clicking on the desired track with a left mouse click. (Note that the normal amplify function still works with the mouse click alone for all tracks). The Control/mouse click action will “lock” the reference track selection to the selected track and ignore any other mouse clicks on other tracks.

The following table (Figure 13) will be displayed with this track lock action:

This table will continue to update every 2 seconds with track updates/drops. Note that the track “lock” condition will continue as long as this form is being shown.

By clicking on the CPA Dist box (where a CPA will occur), the PPI will display the projected track lines showing the CPA event for the reference track and the clicked track. For example, clicking on the “139” label for track 00-0000 in Figure 13 generated the PPI display vectors shown in Figure 14.

The CPA event vectors on the PPI display show the projected tracks for the reference track and the track selected for the CPA event as red dashed lines along the course directions. The CPA positions 12 are indicated with the red circles. Note that the ProxDataTable and the CPA vectors will continue to update every 2 seconds as track updates are processed.

Find out more about DMT products by contacting or visiting:

This article was written by Eddie Hughes. All Rights are Reserveved and Copyrighted by the Author © April 2021. Infoteknico has published this article under authorization of the Author.